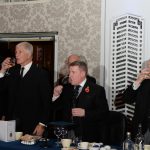 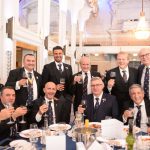 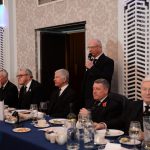 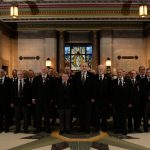 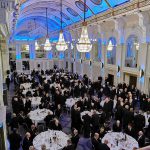 Saturday 30 October 2021 was a day which will live in the memory of everyone who was able to attend this very significant occasion. With the Grand Lodge Consecration team including the M.W. Pro Grand Master – M.W. Bro. Raymond John Smith, the Deputy Grand Master – R.W. Bro. John Herbert Prizeman, the Assistant Grand Master – R.W. Bro. Stephen Davison, the Grand Director of Ceremonies – R.W. Bro. Frank Spencer and a full “supporting cast”, the whole of the Consecration Ceremony was conducted in front of circa 220 Founders and many, many other visitors in the Grand Temple at Freemasons’ Hall, Great Queen Street, London with great solemnity and fabulous ritual. This was one of the singularly most impressive and moving ceremonies which the author has had the pleasure of attending. After the conclusion of the Consecration, R.W. Bro Ryan Williams, Grand Secretary, was Installed as the Primus Master with R.W. Bro. David Frederick Ashbolt as Acting Immediate Past Master. The W.M. then proceeded to install his Officers for the forthcoming year. Principal offices were: Senior Warden – R.W. Bro. Tom Quinn, ProvGM (London),  Junior Warden – V.W. Bro. Cristian Mihutoiu, Grand Inspector (Romania), Master Overseer – Bro. Ameet Watts PPAGIG (London), Senior Overseer – Bro. Oktay Murat Gulbakan and as Junior Overseer – W. Bro. Sotiris Sakellarios. The remainder of the officers were also installed in great style by the Primus Master. Once the business of the day had been concluded, the Lodge was closed in due form. The Festive Board at the Connaught Rooms was very good and after the Toasts the evening ended in good fellowship and Harmony.

There was a photographer provided by the Lodge who took in excess of 500 photographs. We have, obviously only provided a “taster” within this article but should you wish for copies I am sure W.Bro. Mahir Kilic, at Freemasonry Without Borders, will be delighted to forward them to you.