Obituary to the Memory of VW Bro Jagdish Singh Dhadialla

On the morning of the 24th September Mark Masonry suffered the loss of another much loved and highly regarded Brother. Jagdish had suffered with ill health following a road traffic accident a few years ago. This resulted in his having to cut down a large percentage of his attendance at meetings.

He was a founder member of Equator Mark and RAM Lodges and over the years joined many more Lodges throughout the Province. He was a member of 9 Mark Lodges and the equivalent RAM Lodges. He joined many other orders in Freemasonry and devoted much of his time to passionately promoting the fellowship of all those various orders he was involved with.

He was to be seen on many of our Provincial Official Delegations over the years and always in masses of photographs. He really was the first great Masonic Photo Bomber and took delight in “appearing” in the pictures published on our Website!  On 10th September past, Jagdish received his promotion to Past Grand Junior Overseer and had therefore become a Very Worshipful Brother. This was an honour of which he was justifiably delighted and proud.

Jagdish was a dedicated, hard-working and very knowledgeable Mason who was always ready to help and encourage Brethren of all ranks. A very genuine, generous and charitable man.  He will be sadly missed by all who knew him both in this Province and the many other Provinces he visited with our delegations. He will be mourned by everyone whose lives he enhanced just by knowing him. 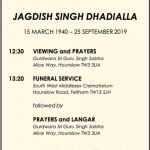