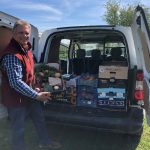 Home for the last 25 years for Paul Brown, Secretary/Scribe of Foundation No.921 Mark & RAM, has been a small village outside Tetbury in the Cotswolds (home to Prince Charles etc.). Here with a business partner, Paul set up a wine merchants which was formed in February of this year when another local merchant went into liquidation. They took on board the staff along with their hotel / pubs / restaurant accounts etc. and merged into his existing business which was to be renamed Tetbury Wines.
When the current crisis hit them just a few weeks later, it naturally caused disruption as all their trade accounts shut down. At the same time as the lockdown was announced, they received a call from a local farm shop who asked if they could support them in any way by delivering food supplies to those over 70 or with underlying health issues and who were having to self-isolate at home within the local area.
They responded immediately in providing delivery vans and including Paul and his business partner, volunteer drivers to get food etc., distributed throughout the week to those at risk.
In his own words Paul says “We did not realise at the time of starting how difficult things would become for our country and albeit an area with many retired people just how many people were finding themselves in need. This has been compounded as the supermarkets are unable in our area to provide a service. My wife tells me the supermarkets cannot offer a click and collect or a delivery slot within the next two weeks, even to those in need, such is the demand on them.
We are now delivering to over 100 households in the local area and I have to say what a rewarding experience it is for everyone involved, if not somewhat exhausting, although we know where there is a decent bottle of wine at the end of the day !
We very much hope normality will resume over the summer but until it does, we will continue to run the service and help the community to the best of our ability”

Congratulations, Paul, for all your efforts and we all wish you the very best of luck in the future.
Editor, London Mallet