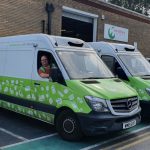 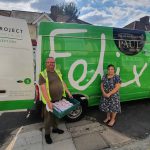 Brethren all, over the past 6 months our Facebook Group and London Mallet posts and articles have abounded with many heart-warming stories and photographs of London Mark Brethren assisting the poor and vulnerable in our communities, in a wide variety of ways during the Covid-19 pandemic. The London Mallet, due for publication in a few weeks time, will as usual contain similar narratives and pictures. For now, here is a special piece from W. Bro. Don McGarr – a brother well known across the Province – giving us an insight into an aspect of his character, which demonstrates the truly generous spirit of Freemasonry and illustrates so well the various charges and exhortations in our rituals – to relieve the necessities of our fellow creatures. Well done Don, not only for carrying out the superb voluntary work which you have been undertaking over the past months, but for taking the time to write up this article, at my request, and sharing your experiences with the members of this wonderful Province of London. And if anyone else out there has similar stories and photographs, which I have not yet heard about and reported on, do please let me know.

“The Covid pandemic and the lockdown have affected people in different ways, some getting pause for thought and realising how lucky they are to have security of employment, a roof over their head, food in the fridge and money in the bank. For others it has meant life has fallen apart, losing loved ones to the virus, losing their jobs, feeling isolated, being made homeless, being unable to afford food. For all of us, we now have a clearer idea of how to concentrate on the important things.

I am very lucky to have been in the former category, and to have kept working and earning throughout, but the inescapable headlines on the news – poverty, unemployment, hunger and recession – led me to realise that, in my comfortable existence, a fiver in the raffle, a donation to charity was for me no longer enough. I realised I was living life comfortably enough but not really doing anything for anyone other than myself. When in my life had I ever done something that nobody had asked me to do?

Volunteering is essentially that – doing something that you don’t have to do because you want to do it. Charitable giving was one thing, but in the absence of Masonic activity I realised that I also had time and energy to spare. I had more to give.

When I was a teenager, I had a part time job in a supermarket. Ethically the most difficult task was to take bin liners off freshly baked bread and put them in the rubbish compacter. Perfectly normal edible food which was put in landfill for no other reason than its sell by date was up. Taking anything home was a sackable offence; they had to be binned. It broke my heart. Ever since then I have hated to see food wasted, as anyone who has sat next to me at a festive board can testify!

A friend of mine, a Mason and fellow Railwayman, had started volunteering with a charity called Fareshare. This and its sister charity, The Felix Project, gather food in bulk from restaurants, bakeries, food retailers and supermarkets, and through their team of volunteers sort these bulk loads into smaller quantities and deliver them by van to individual charities such as school lunch clubs, women’s refuges, church outreach charities, soup kitchens, food banks, community cafes and lunch clubs. Thus, the surplus supermarket food and the bread left over at the end of the bakers’ day goes directly to feed the young, the elderly, the homeless, the disadvantaged, the poor and the isolated. Fareshare and Felix are the link between the spare food, and the people who so badly need it.

In re-evaluating my priorities, I was led to a desire to get involved. From mid-July I have spent one day a week working for Fareshare at Deptford, from 8am – 4.30pm driving a van, loading 750kg of food and delivering it all over South London. I now also spend four hours on a Tuesday doing the same in North London for the Felix Project in Enfield, together with occasional evening warehouse shifts at their other depot in Park Royal.

What do I get out of it? Well, apart from the obvious satisfaction of helping the vulnerable, fighting hunger and tackling food waste, it’s also a good physical workout, they give me a van to drive (yay!), my geography of South and North London is improving by the week, and I get to meet lots of genuine and generous people – not only the other warehouse and driver volunteers, but more especially those working in the individual charities we deliver to, which take the food and convert it into nutritious meals or food parcels for the vulnerable. 50 percent perspiration, 50 percent inspiration, if you like!

The shifts are flexible; mornings and afternoons, no more than 4-5 hours for warehouse work, and 4 hours or 7.5 hours for driving. Felix are taking over the London operation of Fareshare, and they are always looking for volunteers. So if you have time to spare and are reasonably fit, I can thoroughly recommend volunteering. No charity we deliver to has to pay for the food they get, as Fareshare and Felix rely on fundraising and corporate sponsorship to function. Why not donate your time (or some money) to making sure that no one in this city and beyond needs to go hungry? Have a look at their websites (www.fareshare.org.uk and www.thefelixproject.org) for more about what they do.”