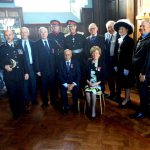 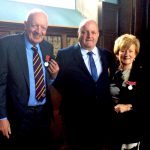 On Wednesday 26 February 2020, VW.Bro. Bob Hancock of Equator Lodge No.1889 was present at Loseley Hall to witness his dear wife Brid being invested with her British Empire Medal by the Lord Lieutenant of Surrey.

Also present was Bob’s son, Jeff Hancock, who was invested with his British Empire Medal by the Lord Lieutenant of London at the Tower of London in November last year. Jeff is a Craft and Royal Arch Mason in London and a member of the Red Cross of Constantine Order in Surrey where Bob is the Intendant General.

Bob says “I am immensely proud of my wife and son. Over many years they have in their separate ways raised over £250,000 for local and national charities and continue to do so. Brid is running a golf day at Coombe Wood Golf Club on 26 June in aid of the Cherry Tree Charity at Clandon and Jeff is walking Hadrian Wall in May in support of Marie Curie”.

The photo shows both Brid and Jeff wearing their medals and Bob holding his father’s British Empire Medal (Military) which was presented in 1951!

At the Burns Event in Bournemouth this January it was the PGM’s great pleasure to present part of the raffle proceeds to Bridget for her to distribute to her charities.