The 4th Annual AAC-AFA ‘Top Gun’ Dinner was held as usual in the Royal Air Force Club  where the events arranger plus Host, and Commanding Officer (CO) Paul D. Fitzgerald, is a member. A full house of 140 booked into dine in the splendid surroundings of the Sovereign’s Room (formally the Ballroom, and renamed last year in honour of HM the Queen, who visited the Club to celebrate the Centenary of the RAF and its Club).
During the proceedings the CO discharged ‘Taking the Salute’ which has proved very popular. It is similar to ‘Firing’ in Masonry (it comes from the college the CO attended, and the tradition of ‘Firing’ derived from the military). Among the many distinguished guests who attended were the Mark Grand Secretary, R.W.Bro. Ryan Williams, and the ProvGM of London Mark R.W.Bro. Tom Quinn who responded to the Toast to the Mark Benevolent Fund. In doing so, he expressed his appreciation of the cheque presented for £1,000, which was raised via the raffle (discharged by W.Bro. Wayne Kraus) plus an auction (discharged by W.Bro. Dr. Miguel Godfrey) where the prize, donated by the CO, was a bottle of Club Red from the Special Forces Club. 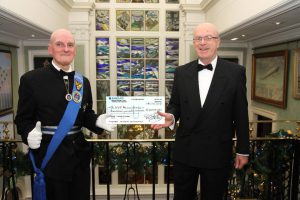 At the finale, the CO performed ‘The Last Salute’ and then led the audience in a selection of Christmas carols. The singing concluded appropriately with ‘Auld Lang Syne’ where a native Scot, R.W.Bro. Tom, proved invaluable in assisting everyone in getting the words right….or as near as any sassenachs and non-Scots can get to the correct pronunciation anyway.

The Banquet concluded with Bugler Ben White (who played the US Air Force Tune on the entry of the Host and his guests) playing ‘Taps’ followed by ‘The Last Post’ during which the CO took the Salute on behalf of all present, as they remembered the fallen, along with those still serving, often doing so ‘In Harm’s Way’ in far away lands. The CO then invited those who wished to do so to join him in the Club’s Cowdrey Bar for further celebration.

Though held in aid of a Masonic charity, the function is a military-related one. Therefore, it was gratifying to see that in addition to the numerous Freemasons and non-masons attending (Ladies attend as well) all the Armed Forces were represented. Namely, the Air Force, the Army, the Marines, and the Navy.

The CO expresses his appreciation to all who attended, including Santa’s Little Helpers aka the ‘Top Gun’ Stewards (yo’all know who you are, so thanks guys) and those, who though unable to attend, gave considerable assistance behind the scenes. Plus, the photographer, W.Bro. Bob Tuthill, who was unable to stay for the dining but very kindly came along to take photographs before the dinner commenced.

Postscript 1.
At the request of R.W.Bro. Tom, the £1000 raised at the ‘Top Gun’ was sent to the ProvGM of Kent, Mark, R. W. Archie Torrance, to support the 2020 Festival which that Province is hosting. The CO received a most kind letter of acknowledge and thanks from W.Bro. Peter Lapage, the Kent Mark 2020 Festival Treasurer.